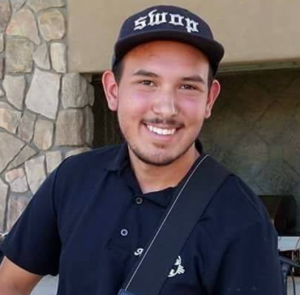 Antonio, a current senior at Earlham College, is graduating this spring with a degree in Sociology/Anthropology and a concentration in Chicano Studies. Antonio is also a McNair Scholar. “The Ronald E. McNair Postbaccalaureate Achievement Program is designed to prepare students who have traditionally been underrepresented in graduate studies for the journey leading to the Ph.D. As participants in the program, students will have access to skills building courses and tutoring, research experiences with a faculty mentor, and individualized assistance through the graduate school application process.” Antonio received a stipend to conduct research this summer on a subject close to his heart: the history of New Mexico’s land grant movement. His research is also part of his senior thesis, and it is so comprehensive that it will be published as a book! Antonio shares a summary of his research below.

Ever since I left New Mexico four years ago, I came across a profound appreciation for our traditions, culture and heritage. Though I will be receiving my degree from an out of state college this upcoming May, I have found a way to intertwine my studies with my experiences as a Genizaro New Mexican. As a prospective law school student, I have decided to conduct my undergraduate research on land tenure in New Mexico. Specifically, my research focuses on land and people through three different systems of law; Spanish Colonial law, laws enforced by the Mexican state, and finally, the current United States legal system.

New Mexico’s indigenous people have been fighting a continuous uphill battle to retain their traditional ancestral lands. My research focuses on New Mexican land grants, many of which were established by Genizaro communities.  The term Genizaro is used to identify Native Pueblo people who have become detribalized and Christianized during the Spanish Colonial period.  Genizaros have roots to various indigenous tribes across the state.  In my research I focus on Genizaro land grants established by the Mexican government in the mid 1800’s.  I break down the historical complexities as well as the contemporary disputes that emerged from the discrepancies of Genizaro grants being established under one system of law and adjudicated under another.  I use two land grants as case studies; La Merced de Los Pueblos de Tierra Amarilla (Est. 1831) in Northern New Mexico and where I currently reside La Merced del Pueblo de Chililí (Est. 1841).

My research is built upon archived documents, newspaper clippings of the time, and most notably interviews with leaders of the land grant movement of the 1960’s.  The 1960’s was a staple in U.S history where many communities were united in their fight for justice and civil rights.  This larger national movement gave birth to the Chicano movement which in turn gave birth to the land grant movement of New Mexico. The two grants that I focus on, Tierra Amarilla and Chililí, were the main hubs of organizing New Mexico’s 100+ land grants.  These grants organized against corporate development of traditional indigenous lands, which was rampant in the 1960’s.  As commonly seen throughout U.S History, these developments broke many treaties signed between the United States and Indigenous communities.  Effected communities, like Tierra Amarilla and Chililí lead a fiery armed resistance toward these injustices, leading to increased surveillance, policing and persecution of community members.  It is in these intersections where I conduct the legal analysis of the establishment of land grants under one system of law while being adjudicated under another system of law.

Land grants were heavily influenced by the idea of communal property that was carried over from traditional indigenous beliefs.  However, when the United States acquired New Mexico under the Treaty of Guadalupe Hidalgo, communal property was no longer accounted for by the government. Instead, the United States followed the ideologies of Lockean Liberalism that justified the Manifest Destiny. In short, Lockean Liberalism established the idea that “if a man works the land, labor shall be his title to it” meaning that ownership of property was dependent on who worked the land.  But, through this ideology a power imbalance emerges.  Communities who worked these lands for centuries were not given the ownership of the land. Instead, the corporations who sought to “modernize” these communities were given the title to the land.  This created a legal battle between indigenous legal system and the now colonial United States legal system. This is the ongoing current dispute with indigenous communities across New Mexico.

My research is complex and multilayered meaning I can’t share much detail in such a short article.  However, if you are interested in learning more about my research, feel free to email me for a copy of the research report. Almaest14@earlham.edu