Reflections on My First Year of College 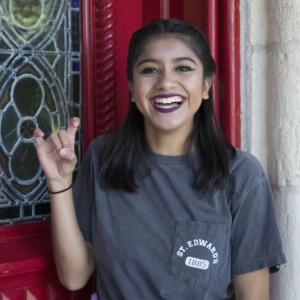 I never thought moving to a different state would be such a challenge for me, since I have been away from home multiple times before. Everything was different, from the weather being humid to eating tacos with flour tortillas. Everything was a new beginning at this point in my transition to college. When school actually started, I felt somewhat like an outsider because everyone who I was surrounded by was mostly from the state of Texas.

This new atmosphere started to create a new student who was the total opposite from her high school self. In class, I would not speak up or ask any questions, even though I did have many questions. I wasn’t speaking up for the fact that I could tell the difference between my prior high school education level to theirs. I started to doubt myself and I was afraid to speak up in class.

Being afraid to speak up did not give me any advantage because I did not create a great bond with any of my first semester professors. Although I felt that I was doing so great academically, I still tried to get myself involved on campus to be able to find my niche. Trying to find organizations similar to the one’s I was involved with in high school here, at St. Edward’s, was somewhat easy due to our involvement fair. If I wasn’t giving my best in the classroom, I could at least show my potential outside of the classroom.

I got myself involved with a service fraternity being Alpha Phi Omega, which is similar to National Honors Society. I also joined programs such as S.E.R.V.E. 1 Day, Hometown Ambassadors, the Freshmen Escape, Big Event and most importantly Service Break Experience. The Service Break Experience is a Campus Ministry organization that allows students do community service in a different city or country for spring break and summer.

My spring break experience was in New Orleans, Louisiana where I helped the Saint Bernard Project build houses from the Hurricane Katrina disaster. Being in New Orleans helped me be aware that many people are still recovering from this hurricane that occurred in 2005. Although we only helped for a week, we still made a difference, we learned the history of the area and meet amazing people, like Burnell. Burnell helped build a grocery store in the lower 9th ward, which helped his community thrive a bit better after Katrina. What made him build this grocery store was telling himself “you can be part of the problem or be part of the solution,” this stuck with me.

After leaving New Orleans, it helped me realize that St. Edward’s is home because it helped me “take on my world.” This helped my second semester run smoother because I found my niche and I was comfortable once again. Looking back, If I could change anything from my first year of college it would be to stop doubting myself and do what I love no matter what anyone else says or thinks.