A Conversation with Ron Simon, Founder 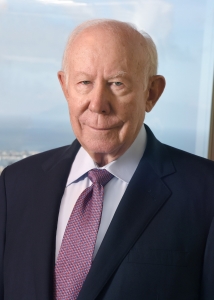 Bear Nash: Mr. Simon, first of all thank you for speaking with us today. Will you tell us a little about yourself and the core characteristics you have embraced that both drive you and have brought about your numerous successes?

Ron Simon: Ever since I can remember, going back to before I was ten years old, I’ve always had a passion for building things. When I was ten I built a playhouse and a pigeon coop for some pigeons that I was raising. I’ve always had a passion to be in business, and even when I was raising pigeons as a hobby I started raising some that could be eaten and would sell them to the neighbors.

I used to ride my bike to the beach, which was probably about nine or ten miles, collect coke bottles, bring them back and sell them to the liquor stores, or wherever you redeemed them in those days. I had a paper route when I was about ten or eleven years old.

So I’ve always really had a passion to be in business and build things. It was never a passion to just make a lot of money. I felt that if you had a business making money goes along with it. But I wanted to do something productive and be very independent. That was very important to me, to build my independence. As I got into business it was more fun to do something that was very creative and very disruptive to the industries that I was doing business in, and that still continues to drive me today.

Ron Simon: I think that it’s difficult to teach someone to be an entrepreneur. Some people are just not born that way, and there are lots of people that don’t think that way and that isn’t to say they aren’t smart people. People with very high IQs generally are not entrepreneurs. Some of them are and those people go to the moon. But very few people are like that.

So I think you have to have a passion for business. I think you have to be somewhat of a risk taker. Growing up and becoming street smart along the way, even at an early age negotiating for things, not having everything handed to you, just knowing your way around and handling people, I think are really important qualities. There are a lot of people that are not born to be business people, and there’s nothing wrong with that. I think that if those kind people go into business they are going to fail, and they shouldn’t be doing it.

So, it’s important to understand who you are and what you’re about. There are all kinds of great people in this world who have accomplished wonderful things that are not business people. I think it’s a question of knowing who you are, and sometimes that’s pretty difficult, but if you’re not a great basketball player don’t get on the court with the great basketball players. Similarly, if you’re not a good businessperson you shouldn’t be trying to compete because you will likely fail. It’s really understanding who you are and following your passions.

Bear Nash: At what point in your life did you become interested in philanthropy?

Ron Simon: I believe when I reached the point where I felt successful. In my company there were many factory workers who were receiving a little more than minimum wage. We would have a holiday party every year and there were certain prizes, $50, $75, $100, maybe a TV set, which meant so much to them, that we’d give away at our holiday parties. I got to know some of the employees and learn about their families. I looked at them and said, my god how are their kids going to go to college? And I thought, wouldn’t it be great to really help them. It’s very difficult to do that in the business environment, it may not be the best business decision. So I started wanting to reach out and help the people in the Hispanic community, because most of my workers were Hispanic. That was the first thought I had about making some very substantial contributions to help those people who were very hard working, responsible people, who needed some help and direction.

Other than that I’ve always contributed to the major causes, but not to the extent and not with the passion I’ve had to giving back to a community where I can see the results.

Bear Nash: So, would you say it was that connection with your workers that inspired you to become more philanthropic?

Ron Simon: For sure.

Bear Nash: Can you tell us what led you to start the Simon Scholars program?

Ron Simon: I thought that by writing checks, and reaching these kids who had no hope of going to college by starting a scholarship program early in high school, it could give them the understanding that becoming a part of this program would help them afford to go to college. That was the beginning of it.

Bear Nash: What was your original vision for it?

Ron Simon: It was for these kids to have a path to college rather than have them give up and say I’ll never go to college. If they feel that way they’re not going to work hard in high school, there’d be no sense in getting good grades. But all of a sudden, wow, here’s an opportunity to go to college. I better get off my butt and study to get good grades so I can make it to college, because I’ll be able to afford it. So my vision was that it would be a life-changing event for them.

Ron Simon: Yes, but more in terms of, now they had the money to go to college and its up to them to do it. However, the program has evolved into something much greater than that, because the money is only part of what is important to them.

Bear Nash: So, speaking to that evolution, you think that vision has changed as the program has unfolded and based upon your success with it?

Ron Simon: No, I think that it has been enhanced. The vision is still there and that’s what we’re trying to accomplish here and doing a good job of it. But as my son Steve and my daughter Kathy established their Simon Scholars chapters, and got in the trenches with these kids, it became obvious they need a lot more than just a check. They needed support, direction, someone to believe in them. Those things were very important and really led to improving their own self-esteem and self-confidence. My vision was a good one, but it would never have happened by just writing checks. It wouldn’t be nearly as effective as the Simon Scholars program is today.

Bear Nash: From a personal perspective, what about the Simon Scholars Program, and your philanthropic work in general, gives you satisfaction?

Ron Simon: Well first of all…. It’s the greatest investment I’ve ever made. That’s number one. Whatever I give I feel like I get back a thousand times just by seeing the impact it has on the lives of these students and the difference they are going to make in this world. And hopefully some of the values that I have lived by will carry through in them.

Bear Nash: Did you realize from the beginning the powerful impact that your program would have on the lives of young people and their families?

Ron Simon: Well I hoped it would, because in most cases, very few in their family ever went to college. Education is essential to being able to succeed today, in most cases. And I assumed that for these students to graduate from college and have great jobs it would have a tremendous impact on them and the lives of their families, friends, and really everybody around them. It would set a great example and give hope to everybody that they could do it too.

Bear Nash: What would you like to see happen in the coming years of the Simon Scholars program?

Ron Simon: It has grown to serve 150 students per year at this point. I’d like to see it continue to grow and serve more students. I think with anything you do, any project you’re involved with, any business you have, your goal should be continuous improvement. You’re going to see ways to make it better. While this is a really effective program, fast forward ten years, I think it will be even more effective than it is today. I would like to see it grow and gain community support. I think the greatest reward will be to see these students graduate from college and become successful, and begin to give back to the program. Through the Alumni Association and other programs reaching back down to help kids who are coming from the same place they were at.

Bear Nash: Speaking to that, if you were to look 50 years into the future how do you hope to see Simon Scholars impacting both Orange County, and more broadly the country.

Ron Simon: Wouldn’t it be wonderful if one of these scholars would one day become President of the United States? But that’s a long shot, so we can only hope that the scholars will have a very positive impact on the communities they live in. I would like to see more programs like this developed in communities outside of Southern California and New Mexico. Perhaps as our program grows other philanthropists or communities will want to start their own programs using this as a model.

Bear Nash: Our last question today is, do you have any tips for young people today that might help them achieve success in life?

Ron Simon: Don’t give up. No matter how devastating the future may look to you, don’t give up. Keep fighting. Believe in yourself. Continue to dream. Work hard, and you can make it happen. Remember, adversity creates opportunity.

Bear Nash: Thank you very much Ron. We really appreciate your time and the insights you’ve shared.